X
X
Back to the top
X

Here There and Everywhere My life recording the Beatles

Geoff Emerick became an assistant engineer at the legendary Abbey Road Studios in 1962 at age fifteen, and was present as a new band called the Beatles recorded their first songs. He later worked with the Beatles as they recorded their singles “She Loves You” and “I Want to Hold Your Hand,” the songs that would propel them to international superstardom. In 1964 he would witness the transformation of this young and playful group from Liverpool into professional, polished musicians as they put to tape classic songs such as “Eight Days A Week” and “I Feel Fine.” Then, in 1966, at age nineteen, Geoff Emerick became the Beatles’ chief engineer, the man responsible for their distinctive sound as they recorded the classic album Revolver, in which they pioneered innovative recording techniques that changed the course of rock history. Emerick would also engineer the monumental Sgt. Pepper and Abbey Road albums, considered by many the greatest rock recordings of all time. In Here, There and Everywhere he reveals the creative process of the band in the studio, and describes how he achieved the sounds on their most famous songs. Emerick also brings to light the personal dynamics of the band, from the relentless (and increasingly mean-spirited) competition between Lennon and McCartney to the infighting and frustration that eventually brought a bitter end to the greatest rock band the world has ever known.

There are no reviews yet. 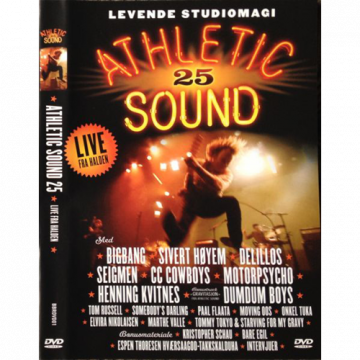 If you need a studio with great sound, top equipment and experienced, friendly staff, then you need Athletic Sound.

Founded in 1983 by renowned producer Kai Andersen (Dr Kai) and tucked away in the Norwegian town of Halden, Athletic Sound is located in an 18th century school building in the heart of the town.

This website uses functional and analytical cookies in order to offer you an optimal user experience. These cookies do not contain personal information. Athletic Sound and its partners use cookies in marketing and to ensure that you see relevant advertisements without telling advertisers who you are. By agreeing below, you consent to the use of these cookies.

You can adjust all of your cookie settings by navigating the tabs on the left hand side.

Functional cookies are necessary to use the primary functions of the website. For example, to memorize language settings, but also to prevent the website from being overloaded. These cookies are always used and are necessary for the operation of the website. The information collected by these cookies is not used for marketing purposes. In addition, we use functional cookies to detect website abuse, and for services, such as for example, registering a number of consecutive failed log-in attempts. We do not need to request permission to place and read these cookies.

Functional cookies should be enabled at all times so that we can save your preferences for cookie settings.

If you disable this cookie, we will not be able to save your preferences. This means that every time you visit this website you will need to enable or disable cookies again.

This website uses analytical cookies with which we anonymously collect and report data with the aim of better understanding visitors on our website. We use this information to improve our website. This information will not be used to create personal profiles.

We use Google Analytics to collect visitor statistics to further improve the site. A data editing agreement with Google has been concluded for this. Data exchange with other Google services is disabled and IP addresses are anonymised.

Please enable Strictly Necessary Cookies first so that we can save your preferences!